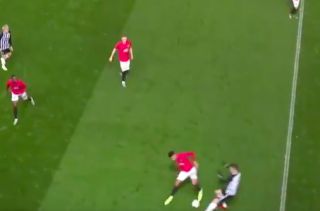 Mason Greenwood justified his selection in the starting eleven by Ole Gunnar Solskjaer tonight with another impressive Europa League performance.

The 18-year-old looked dangerous as part of an attacking trio with Anthony Martial and Rashford; each scoring to secure United’s passage into the Europa League knockout phase.

He took United’s opening goal in a typically composed fashion, wrong footing the goalkeeper before sliding the ball into the net from close range.

Some fans even compared the style of his finish to former great striker Robin Van Persie.

Greenwood’s strike and deflection to set up Martial’s stunning solo effort means he is the youngest United player ever to contribute a goal and assist in a European game.

It’s some feat for the youngster, who continues to impress at every opportunity under Solskjaer.

The starlet also gave fans one for the highlights reel, with a brilliant roulette skill as he was brimming with confidence after putting the Reds in front.

See the skill below: