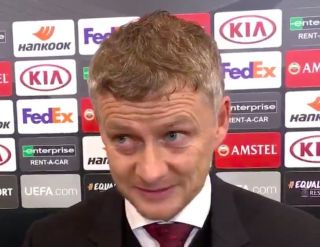 Ole Gunnar Solskjaer says his Manchester United side ‘needed’ a convincing performance as the Reds eased to a 3-0 Europa League victory over Partizan Belgrade.

It was a comfortable night for the Reds, who ensured qualification for the knockout stages thanks to goals from Mason Greenwood, Anthony Martial and Marcus Rashford.

Martial’s solo effort was the pick of the goals, as his exemplary close control took the ball past three Partizan defenders before he slotted home to double United’s lead.

However, it wasn’t all good news for Solskjaer as key midfielder Scott Mctominay went off injured after rolling his ankle.

The Scottish international looked in some pain as he walked down the tunnel, and is now a doubt for Sunday’s Premier League clash against Brighton.

See Solskjaer’s post-match interview with BT Sport below, where he discusses McTominay’s injury.

"Maybe we will rest a few for Astana."

Ole Gunnar Solskjaer shares his thoughts on qualifying for the knockout stages and gives an update on McTominay's injury.

Solskjær on McTominay's injury: "I don't know, didn't look too good. I hope he will recover for Sunday. He went over on his ankle." #mulive