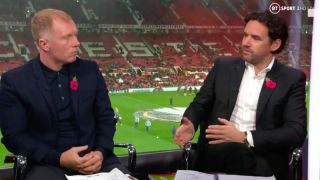 Former Man Utd midfielder Owen Hargreaves has singled out Scott McTominay as being the one player setting an example at the club right now.

It’s been a poor start to the season for Manchester United, but Hargreaves believes it is important for everyone to accept this is a transitional period.

Most people probably won’t share that degree of patience, though it’s important to until it looks like Ole Gunnar Solskjaer has lost the dressing room… should that happen – because it’s not the case right now.

Speaking on BT Sport, as seen below, Hargreaves picked out McTominay as a player others could learn from.

“Scott McTominay is what every Man Utd player should play like every time they step on the pitch.”

“Ole knows what he wants, he is NOT a yes man.”

Owen Hargreaves and Paul Scholes debate whether or not progress is being made at Old Trafford 🇾🇪 pic.twitter.com/V56bKtSVzM

McTominay has certainly improved this season and is not a player fans feel left down by, unlike others!