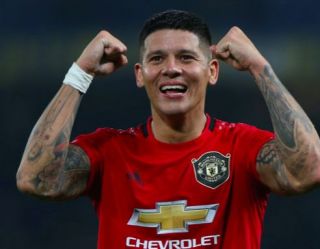 Ole Gunnar Solskjaer was full of praise for Marcos Rojo after Manchester United eased into the Europa League group stages with a 3-0 victory over Partizan Belgrade.

The Argentine defender again looked assured at the back for the Reds, and has worked his way back into the manager’s plans after it looked like he would leave Old Trafford this summer.

United have yet to concede a goal in the Europa League this season, and Rojo has started at centre-back in three of the four games that have been played so far.

Rojo has somewhat resurrected his career at the club after filling in well for injured youngster Axel Tuanzebe, who had leapfrogged him in the central defensive pecking order.

However, with Chris Smalling out on loan in Italy and games coming thick and fast, the 29-year-old will expect to play more games in the coming weeks and it now seems he will stay the club beyond the January transfer window.

Solskjaer spoke in glowing terms of Rojo in the post-match conference, as quoted by BBC Sport journalist Simon Stone below:

OGS high praise for Rojo: "He has such a big heart and such a passion. He is a winner. To have him in a good mood and in good form. Spreads fear in training with his tackling. He really cares about this game."