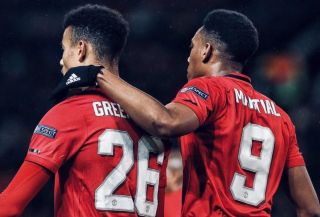 Man Utd sealed their place in the Europa League knockout stages with two games to spare after the Reds recovered from defeat at Bournemouth with an eye catching win full of fluidity and free-flowing football.

Much has been made of the profligacy of Ole Gunnar Solskjaer’s side, but there were no such problems this time as the Reds turned in our best showing of the season so far against the Serbs of FK Partizan.

Solskjaer named a strong side for the Group L clash as we enjoyed the rare sight of a goal glut at home. Here we run the rule over those in Red.

United’s reserve keeper had very little to do as those in front of him were dominant. FK Partizan failed to register a shot on target, rendering Romero a spectator. Nonetheless, he kept a clean sheet and continues to be a solid and dependable back up. Never lets us down when calles upon.

Had a bad day at the office against Bournemouth after he was spun for the Cherries winner but he quickly flushed that out of his system. AWB had little to do defensively so focused on getting forward as much as possible. He started the move that led to Mason Greenwood’s opener and played his part in helping his cohorts to a clean sheet. Much better.

A few shaky moments for the world’s most expensive defender, but it cannot be argued that he’s made a difference to this side. Almost scored a first half goal and went down injured midway through the match. Slabhead soldiered on and played 90 minutes in a clean sheet. A performance that typified his Reds career to date – solid if unspectacular.

If reports elsewhere are to be believered, as per the Metro, Solskjaer has changed his mind on the Argentine to the extent where he no longer wants to let him go. Surprisingly handed a new deal, Rojo has become third choice owing to injuries to Axel Tuanzebe and Eric Bailly.

Picked up his obligatory booking but was also involved in Marcus Rashford’s goal. To be fair, he did well to get a nice assist. Does the fact that he started over Brandon Williams mean the latter will start against Brighton at the weekend? I would hope so. There’s no future in starting Young every game but he wasn’t tested against Partizan.

Another quietly impressive showing at the heart of the Reds engine room. A surprise selection for this one in Solskjaer’s almost full strength side, the sight of McSauce limping off 15 minutes from time will come as a worry. He received applause from all sides of Old Trafford when he hobbled down the tunnel. Solskjaer will hope one of his star men will recover quickly.

Whisper it, but the Brazilian has shown a few green shoots of recovery in recent weeks. Despite his penchant for shooting from miles out, he linked the play, tried to get forward and his distribution was neat. He’s had his critics, justifiably so, of which I have been one, but credit where it’s due. He was hooked after an hour.

What a talent. This young lad is coming of age before our eyes and showing a maturity beyond his years. Comes alive in the box and took his first opening with aplomb. There is shades of RvP about him. He will be special. Only just 18, he’s our joint top scorer and as well as the opening goal, he also set up the second for Anthony Martial. A star is born.

No co-incidence that Mata starts and United play very well and score thrice. Even though he wasn’t directly involved in any of our best moments, he could find space in a phone box and what he lacks in pace he compensates for in speed of thought. I think this will be his last season as a United player though sadly. Probably should have scored in his best performance for ages.

People expect Rashford to be bagging 25 a season forgetting he’s barely into his twenties. That lad’s an absolute menace and any top team would take him if he were available. Makes the easy look hard and the hard look easy. Missed numerous sitters but score a (nother) worldie. He only scores screamers, and his movement and link up with Martial was telepathic at times.

My man of the match along with Greenwood. Goodness, what a goal that was – reminiscent of THAT strike on his debut against Liverpool all those years ago. If only he could do it more often and not only when he feels like it. What a difference he has made since returning from injury. Tony Martial scores again!

Did nothing wrong, did nothing spectacular either. A nice moment for the 18 year old as he made his Old Trafford debut. We’re sure he will have dreamt of this. With United safely through, expect to see more of him in this competition

Presumably saved for Saturday hence his apperance only as sub. He replaced Rashford with the game won and had a few nice touches late on.

Did little. I hope Solskjaer isn’t saving him for Saturday as Lingard should be nowhere near this team.