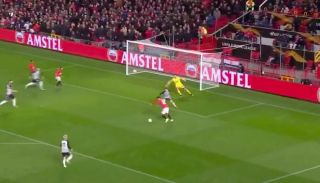 Mason Greenwood has given Manchester United the lead against Partizan Belgrade in the Europa League group stages.

A win puts Ole Gunnar Solskjaer’s side into the knockout stages and the 18-year-old has put the Reds in control with his second goal in the competition this season.

The teenager received the ball from a poked pass by Marcus Rashford, before wrong footing the Partizan goalkeeper and slotting home.

United had previously missed a hatful of chances to take the lead with Marcus Rashford firing agonisingly wide after good work on the right hand side byAaron Wan-Bissaka.

It’s great to see Greenwood be rewarded with a start and he has certainly taken advantage by giving the Reds the lead in the opening exchanges.

Man Utd go up 1-0 after the youngster reacts quickest and finishes with ease! pic.twitter.com/ltARzN3Irw