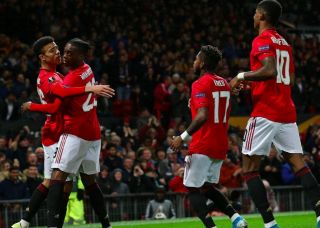 Mason Greenwood became the youngest Manchester United player to score and assist a goal in a European competition against Partizan Belgrade tonight.

The Reds secured qualification into the Europa League group stages by easing to a 3-0 victory at Old Trafford, their biggest home win since the opening Premier League game against Chelsea.

Greenwood was handed a start on the right-wing by Ole Gunnar Solskjaer and made an immediate impact, opening the scoring midway through the first-half.

The 18-year-old received a poked through ball by Marcus Rashford and produced a typically composed finish, wrong footing the goalkeeper before slotting in with his left-foot from close range.

He then assisted after he closed down an attempted Partizan clearance and the ball deflected to Anthony Martial who took on three defenders in a special solo goal.

NEXT:Concern for Manchester United as key midfielder forced off with injury against Partizan Belgrade

Greenwood is delivering at every opportunity for United and could be a solution to Solskjaer’s problems on the right-wing.

The Norwegian has already described the youngster as the most natural finisher at the club and its time for Greenwood to get more minutes and see if he can make a difference for the Reds in the Premier League.

18y 37d – Aged 18 years and 37 days, Mason Greenwood is the youngest player to score and assist in a European game for Manchester United. Prodigy. pic.twitter.com/QvWnsTywwo