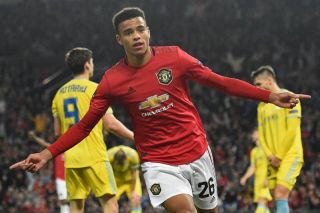 Man Utd are at home and Ole Gunnar Solskjaer is going for a side that really should put the sword to Partizan Belgrade.

The Red Devils have been at fault all season for sitting back once they go a goal ahead in games, however, with tonight’s line-up containing three strikers it looks like Solskjaer wants to put an end to that.

READ MORE: How to watch Man Utd vs Partizan Belgrade on TV and online

Sergio Romero starts in goal, as expected, with Aaron Wan-Bissaka, Harry Maguire, Marcos Rojo and Ashley Young forming the defence in front of him.

In midfield Scott McTominay and Fred sit behind Juan Mata; the Spaniard hasn’t played much football this season and has been underwhelming at best. His job tonight will be to unleash the attacking trio: Mason Greenwood, Anthony Martial and Marcus Rashford.

It would be great to see some free-flowing football but maybe that’s too much to ask of this side? Or, is it a matter that Solskjaer can’t get the best out of them?