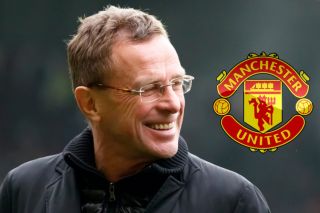 Rumours linking Ralf Rangnick to Man Utd have reached a point that this all seems very real now, with respected journalist Raphael Honigstein giving a rather big update.

Honigstein claims that Rangnick held a meeting with a Manchester United representative, as per The Athletic (subscription required).

(Manchester United) recently dispatched a member of Ed Woodward’s staff to a lengthy meeting with Rangnick in Germany, ostensibly to question him about his experience in setting up the RB Leipzig academy and coaching network.

Some days earlier Honigstein was asked if rumours linking Rangnick to Old Trafford were accurate. As part of a Q&A via The Athletic, the reporter replied: “I know for a fact that United are keeping very close tabs on him.

“Whether that suggests that OGS [Solskjaer] is soon gone is another thing, however.

“I get the sense that they’re more looking at him — and probably others — as a contingency right now.”

Meanwhile, The Express boldly claim Rangnick rejected the vacant position at Bayern Munich because he wants the United job.

READ MORE: Man Utd have fears over Daniel James; unknown if he will play next two games

Bayern sacked Niko Kovac on Sunday after suffering a 5-1 hammering at the hands of Eintracht Frankfurt. After winning the Bundesliga last season, the Bavarians’ form has slipped.

The frontrunner for the job appeared to be Rangnick, who impressed during his two stints as RB Leipzig manager, but now former Arsenal manager Arsene Wenger is deemed a potential candidate, as per the Metro.

Bild’s Christian Falk also reports that the 61-year-old turned Bayern down — also suggesting Rangnick is keen on the United job.

Ralf Rangnick is still an option at @ManUtd if Ole Gunnar Solskjær will get sacked. Rangnick is interested

Ole Gunnar Solskjaer is under pressure to turn United’s season around, like he did as caretaker manager, and if Champions League qualification becomes an impossible task, the pressure will only build.