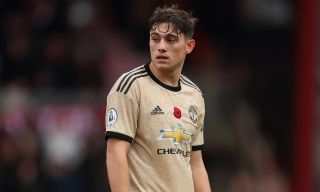 Ahead of the international break, Man Utd have two important matches against Partizan Belgrade and Brighton.

Win tonight and we’re through to the Europa League knockouts.

Then on Sunday, in the Premier League, Ole Gunnar Solskjaer’s men must get back to winning ways after losing 1-0 against Bournemouth.

The question now is will Daniel James be involved in the Partizan and Brighton games?

Following a report from Daniel Cutts in The Sun, it is claimed that United are concerned about burnout hitting the 21-year-old winger.

The report stated the following: Ole Gunnar Solskjaer is planning to give Manchester United whizkid Daniel James a rest.

The United boss fears the Welsh winger could risk burnout or serious injury if he carries on.

The Sun doesn’t clarify if James will miss the two games before the break.

James has proven to be a terrific signing this season scoring 3 goals and registered 2 assists thus far in the league.

The former Swansea City starlet has been called up to the Wales squad for the international break which comes as no surprise, but hopefully Ryan Giggs will take note of these burnout concerns when it comes to playing for Wales next time out.