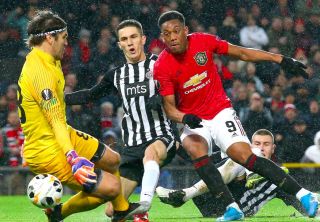 Anthony Martial has produced a piece of brilliance to double Manchester United’s lead against Partizan Belgrade in the Europa League group stages.

The Frenchman’s penalty proved to be the difference between the two sides in the reverse fixture a fortnight ago, but Ole Gunnar Solskjaer’s side look far more comfortable at Old Trafford this evening.

Martial picked the ball up following a failed Partizan clearance, before taking the ball past three defenders with some exceptional footwork and finding the bottom corner.

Mason Greenwood had given United the lead with a composed left-footed finish from close range.

Moments after scoring, Marcus Rashford fed Martial through on goal again, but he lifted the ball over the bar with a chipped left footed effort.

Martial’s long-term injury was a huge blow for Solskjaer and the Reds look far more threatening going forward with the Frenchman on the pitch.

See the goal below:

Anthony Martial that is special 🤩

Sensational goal from Martial. This has been very good so far #MUFC

2-0 Martial. First time Utd have scored more than one at OT since Chelsea game. Weaved into box and finished under keeper.

What a goal that is from Martial. Four lovely touches. Done three Partizan defenders and the goalkeeper. Class.

Martial absolutely World Class there. Messi scores that and the World is preaching

5 – Anthony Martial has scored five goals in his last seven starts for Manchester United in all competitions, as many as he had in his previous 17 starts for the club. Crafty. pic.twitter.com/WIseuatAtl

That Tony Martial goal is so lovely 🌺🤩❤️#MUFC

In Greenwood and Martial we have two players that are genuine finishers in and around the box. Confident, composed and ice cold when in really matters. A front two of those two would be special. pic.twitter.com/2ChNpmbogE