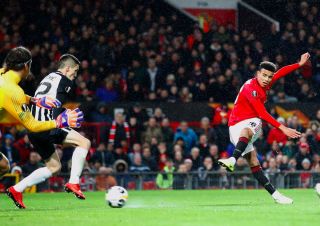 The 18-year-old opened the scoring for the Reds against Partizan Belgrade in the Europa League tonight with a typically composed left-footed finish.

Greenwood cut in from the right following Marcus Rashford’s through ball and swept home after wrong footing the goalkeeper.

It’s certainly high praise to compare Greenwood to a player of the quality of Van Persie, who brought the Reds their 20th and most recent title in Sir Alex Ferguson’s final season at Old Trafford.

But the youngster does have some similar traits to the Dutchman who certainly isn’t a bad role model to try and replicate.

Greenwood, along with United attackers Anthony Martial and Marcus Rashford, is enjoying himself tonight with the Reds comfortably securing their way into the Europa League group stages.

All of the front three have scored with impressive finishes and been involved in some superb link up play.

See some comparisons fans have made between Van Persie and Greenwood below:

Mason Greenwood's finishing is so similar to Van Persie's. If he can be half as good as RVP, then he would be terrific!

That first half greenwood goal reminds me of rvp, clever positioning with clinical finish

I swear Mason Greenwood is RVP in disguise! Mannerisms when running, technique etc. Uncanny really how similar they are!!!!!

In other news Greenwood is going to be some player. Clinical af. RVP esqe

Mason Greenwood has the same finishing technique as Robin van Persie. It's pretty ridiculous to watch, it's like watching a clone of Van Persie at times.