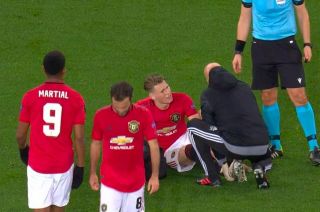 Manchester United have yet another injury concern after Scott Mctominay hobbled off injured against Partizan Belgrade in the Europa League.

The midfielder looked in pain as he walked down the tunnel after over stretching and going down injured in the final fifteen minutes.

McTominay was replaced in midfield by Jesse Lingard with the Reds already cruising through to the Europa League knockout stages thanks to goals from Anthony Martial, Mason Greenwood and Marcus Rashford.

However, the Scot’s condition will be a huge worry for boss Ole Gunnar Solskjaer as the injury list continues to grow.

Solskjaer is already short in options in the centre of the park and there is a still mystery surrounding the return date of star man Paul Pogba.

McTominay has been a mainstay in Solskjaer’s side this season and the Norwegian will hope he can recover for the home game against Brighton on Sunday afternoon.

Scott McTominay goes down injured, and is replaced by Jesse Lingard.

McTominay off. Walking round ground to huge applause. Looks in pain.