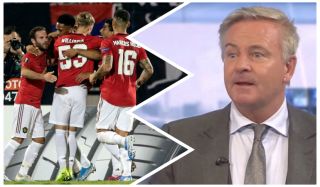 Ole Gunnar Solskjaer’s side won their first away match of the season two weeks ago in Belgrade, beating Partizan 1-0 thanks to a goal by Anthony Martial.

Nicholas, who shares his Europa League predictions as a pundit on Sky Sports, predicts Manchester United to win 2-0 this time out.

“We keep going around the houses of Manchester United,” Nicholas told Sky Sports. “Jeff Stelling asked if they had turned a corner but none of us could see it, they have not developed yet.

“Anthony Martial is back and Marcus Rashford is finding some form, while Scott McTominay has been playing well, apparently. I would say he has been playing better. He has probably been Manchester United’s most consistent player.

“Elsewhere, Harry Maguire is struggling and so are the full-backs. The young players are striving a bit, but it is a hard environment for them. But Martial will turn up here and it should be an easy enough night for Ole Gunnar Solskjaer’s side.”

That result would be enough to book United’s place in the knockout stages. We honestly haven’t looked a side good enough enough to win it outright and there are still clubs to drop in from the Champions League group stages, but Solskjaer must realise it’s our best chance at getting back into the more prestigious European tournament next season.

At Wednesday’s press conference, Solskjaer hinted that United would play on the front foot and stop stepping back in games once they go ahead.

That needs to start now and remain the case between now and the end of the season. It’s the only way to kill off teams, by sticking the sword in.