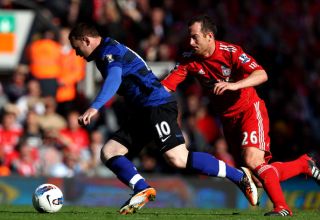 The midfielder has stated that the Old Firm atmosphere between Rangers and Celtic was better than the atmosphere generated during Liverpool and Manchester United fixtures.

A pretty limited footballer with cracking set-pieces, Adam started his career at Rangers before moving to England.

People were made aware of Adam when he played for Blackpool. His corner-kicks, free-kicks and shots from distance had the spotlight on him.

Speaking to The Big Interview with Graham Hunter, Adam labelled both atmospheres as incredible but stated that you couldn’t yourself think during Old Firm matches.

“The Old Firm is incredible,” Adam told The Big Interview. “At Anfield it’s incredible. It’s a tight ground, but with the Old Firm, you cannot hear yourself think even if I’m talking to you 10 yards away. You just have to take a break in the game and speak to each other.

“It’s so intense. When Celtic had the behind the goal, at this moment in time, they are only getting 800 tickets, it’s a waste of time. But the whole atmosphere at the Old Firm it was amazing.”

The next person they’ll need to ask — perhaps with the opposite bias — is Steven Gerrard, currently manager of Rangers and doing a good job too.

These are without question the two biggest rivalries in British football, but surely United v Liverpool tips it. Much better clubs too!

They both have their fair share of great matches, memorable moments and controversial clashes. A trend that will forever continue.