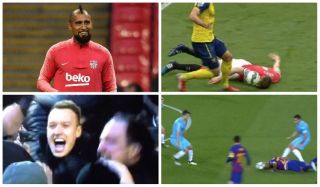 Are you Phil Jones in disguise?

Barcelona midfielder Arturo Vidal recreated Jones’ ridiculous header with the ball on the ground in their scoreless draw against Slavia Prague in the Champions League on Tuesday night.

During the clash at the Nou Camp, Vidal took a leaf out of the Man Utd defender’s book by heading the ball on the floor.

The official Instagram account for the UEFA Champions League posted Vidal’s hilarious attempt following the match, with the caption: ‘There was only one way Vidal could keep the move alive… This HAD to be Skill of the Day.’

It was equally surprising as Jones’ infamous tackle on former Arsenal striker Olivier Giroud with his head four years ago.

Jones lost his balance when chasing down the Frenchman before managing to challenge with his head and knocking the ball out for a goal kick – brilliantly deflected off Giroud.

Vidal’s attempt, as seen below, turned out to be a pass to Barcelona teammate Lionel Messi.

Arturo Vidal is something else 😂 pic.twitter.com/3W1klO9Awk