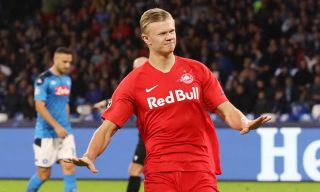 READ MORE: Who Man Utd scouts will be watching in the Champions League on Wednesday night

It only makes sense that Manchester United would be tracking Haaland’s process, and given he’s a player that worked well under Solskjaer previously, you’d think the manager would be sending out signals ahead of next summer.

There’s no way, in my opinion, that Haaland will leave Salzburg in January.

Freund told Austrian newspaper Kronen Zeitung, as cited by Sport Witness: “He’s a cool guy and he’s very good with it. The rumours do not burden [him]. I think it’s more of an appreciation. This is great for the player and for the club.

“We are happy with the development he has made in such a shirt time. It is extraordinary for such a young player to have such statistics at the age of 19 and to have a positive spirit as well. If we does not hurt himself, he will make an extraordinary career.”

Freund also accept that Salzburg will struggle to keep Haaland, adding: “We also know about the mechanisms of football.”

Today a report published by the Metro claims United will have to make the striker the second most expensive player in the club’s history should they wish to sign him anytime soon.

Comparisons to the supremely talented Kylian Mbappe aren’t far off. Haaland has bagged an incredible 23 goals so far this term and netted again on Tuesday night against Napoli — now he is just the second player behind the PSG starlet to score in four consecutive Champions League appearances.