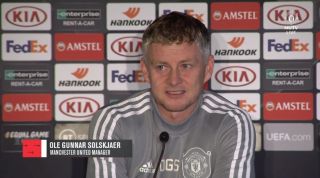 Man Utd will be without Victor Lindelof for Thursday night’s Europa League clash against Partizan Belgrade.

Ole Gunnar Solskjaer confirmed that Lindelof picked up a knock against Chelsea and it has ruled him out of tomorrow’s game – the Swede wasn’t at the open training session at Carrington either.

“He won’t be fit for tomorrow, no,” Solskjaer said at his press conference (via Manchester Evening News). “He got a knock against Chelsea and he didn’t come through the game against Bournemouth without a reaction so he will be out tomorrow.”

This only really comes as a blow to Solskjaer if Lindelof is out for longer and missed the game against Brighton on Sunday.

READ MORE: Benitez attempts to explain why Liverpool couldn’t compete with Man Utd during his reign

Phil Jones or Marcos Rojo are likely to start in central defence against Partizan — with Axel Tuanzebe still out injured — and partnered by Harry Maguire to have that leadership in our line-up.

United have kept three clean sheets in the Europa League this season and Solskjaer will hope his players can get another whilst playing on the front foot.

The manager also expressed his views on that, criticising the team for sitting back in games after going 1-0 up.

“We have to start tomorrow,” he added. “Hope Partizan don’t remember this with joy. I’ve played in quite a few games at home where if you get a start you can fill your boots. Play front-foot football. We’ve been in so many games where we’ve been one goal up and taken a step back.”

There’s been some doubt surrounding Paul Pogba’s injury and when he should be back playing. Solskjaer suggests the midfielder will be back by early December.

“He said it himself. It won’t be too long until he’s out of his cast. He’ll work hard during the international break and hopefully he’ll be back.”

The sooner we get players back the better. Then United have a much better chance of turning their season around because sustaining injury after injury has made Solskjaer’s job a lot harder.

Obviously, the manager will want to go into the transfer market and better his squad (he really needs to) but he can’t afford to offload too many players because it’s very light at the moment — and lacking in quality.