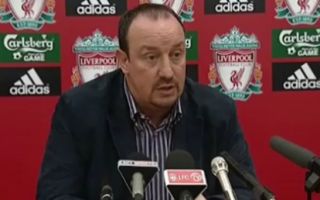 Rafa Benitez has tried to explain why Liverpool couldn’t compete with Man Utd in the Premier League when he was in charge between 2004-10.

The Spaniard never delivered the league title to Anfield during his reign, but is still considered a legend on Merseyside for leading Liverpool to their first European Cup triumph for 21-years.

Of course, we acknowledge that it was a difficult time in English football with United still dominating, Chelsea had just appointed José Mourinho, and Arsenal were only beginning the fade off.

Benitez’s best domestic campaign saw Liverpool finish runners-up to United. The same season he lost the plot and went on that ‘FACT’ rant!

“Competing in the Premier League was always more difficult,” Benitez wrote in The Athletic. “We just didn’t have the resources of Chelsea, Manchester United or even Arsenal. Manchester City were coming. We were close, but the others were strong.

“When I say stronger, it means that Manchester United had a budget way in excess of ours; around £50 million more, a lot of it from the size of their stadium alone. When you consider that our annual budget for new signings was £20 million.

“What that meant is Manchester United could buy two top players every year. They could afford to make mistakes because they had more money; they could get half of their new signings wrong and still be better, because they already had a very good team.”

Who built that ‘very good team’? Who identified the right players for that squad? Who managed the same club for 26-years and won 13 league titles?

It’s funny how Benitez doesn’t once acknowledge Sir Alex Ferguson in his take on why Liverpool weren’t successful under his reign. To him, it had more to do with our financial superiority, even during times when investment was lacking under the Glazers.

But seriously, is Benitez still that bitter about Fergie after all those years? He took on a greater manager and was made look a clown. Simples.