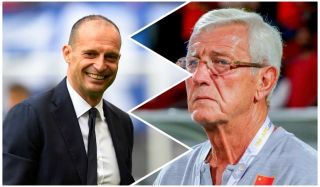 The China head coach thinks the fellow Italian should take over at Man Utd amid mounting pressure on Ole Gunnar Solskjaer.

Massimiliano Allegri is the ideal candidate to become Manchester United’s next manager, according to legendary coach Marcello Lippi.

Solskjaer was handed a permanent contract for three-years back in March after a short positive stint as caretaker manager following José Mourinho’s dismissal last year.

During that run as interim boss, Solskjaer oversaw 15 wins from 17 games, but results since the end of last season have taken a significant dive.

Talk of a potential change in management at Old Trafford continues to do the rounds, with some fans happy to see the former player axed, and Lippi feels Allegri would be the “best choice for United”.

“Allegri would be good everywhere as as a great admirer of the English club I would be happy to see him take over,” Lippi told the Daily Mail.

“Manchester United is the history of English football. There have been dark years but the club is fantastic, from the backroom to the players, everyone can say what it means to play at Old Trafford.

“I think Solskjaer was an exceptional striker and a good coach. For Allegri, I consider him an exemplary professional who has the style of Juventus in his blood.

“My deep friendship with [Sir Alex] Ferguson allows me to say that he would be the best choice for United.”

Allegri won five consecutive Serie A titles at Juve, and reached two Champions League finals, therefore, he has reached the heights we now aspire to.

His style of football, however, is something the club claims to be getting away from. Juventus have an iconic way of playing, but so have we — it’s just been lost these past years.

Lippi is certainly in favour of it, though.