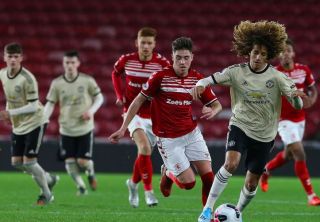 There’s plenty of reason for Manchester United fans to get excited by new wonderkid Hannibal Mejbri.

The youngster produced a stunning assist on just his second appearance for Neil Wood’s u23 side against Middlesborough at the Riverside last night; a sumptuous through ball expertly finished by fellow afro-haired academy talent Tahith Chong.

But who is the youngster that many fans on social media are already so impressed with?

Mejbri, 16, arrived at Old Trafford this summer from Ligue 1 side Monaco. According to Manchester Evening News,  the deal cost the Reds almost £10m, a high price to pay for an academy teenager, despite his obvious talent.

The teenager is versatile and can play across the forward line but usually operates in central midfield where he can exemplify his excellent passing range.

Before his spell in Monaco, Mejbri also played for the academy sides of Paris FC and AC Boulogne-Billancourt. His 990k move (Transfermarkt) to Monaco’s youth setup came when he was just 14.

Mejbri has made eight appearances for France’s u16 national side, but also has the option of playing international football for Tunisia because of his dual citizenship.

So far, Mejbri’s only appearances for United’s u23 side have come in cameos against Aston Villa and Middlesbrough.

However, Monday night’s performance at the Riverside is what has really caught the eye of some fans, who witnessed the 16-year-old come on with United 2-1 up and the game finely poised.

Mejbri produced a fantastic ball shortly after coming off the bench for Chong to seal the three points for the Reds, who eventually ran out comfortable 4-1 victors thanks to the youngster’s impact.

Fans shouldn’t get too carried away with Mejbri who is still extremely young, but his talent is undeniable and the Reds certainly have another wonderkid among their youth ranks.

It will be interesting to see if his impact from the substitutes bench on Monday night will yield more minutes in the u23 side under Neil Wood in the coming weeks.

See his stunning assist for Tahith Chong below:

Mejbri, 16, assisting in his 2nd appearance for the U23s. pic.twitter.com/GE6u1MKI4F

Hannibal Mejbri…remember the name, got a player there

Hannibal Mejbri will be in first team within 18/24 months. Kid is so talented