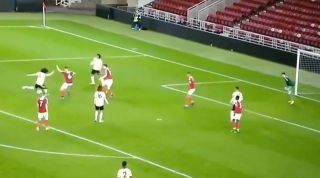 After assisting one of Arnau Puigmal’s goals in the first-half, the 19-year-old was on the scoresheet twice to take his tally for the season to four goals and two assists in nine appearances.

As seen in the video below, Chong showed excellent composure and finish in the box, which could influence Ole Gunnar Solskjaer to give the young Dutchman more time in the first team.

Time will tell but United are still in the Europa League and Carabao Cup, but other than that I don’t see Chong getting many minutes.

A loan move would do the youngster wonders and he probably should have been sent in the summer just gone.

However, if he can show this level of quality on a consistent basis in the first team, we’ve got a gem on our hands! No question about it.

Another player who starred for the Under 23s last night was Puigmal.

We all know plenty about Brandon Williams, James Garner and Mason Greenwood because they’re all part of the first team now. But now Puigmal has made his case known against Boro.

As seen in the video below, the youngster produced a moment of real quality as he whipped in a superb free-kick to give United the lead.