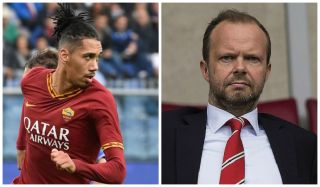 Roma have had an opening bid of £13 million for Chris Smalling rejected after talks on Monday, according to reports.

The Manchester United defender is currently on loan at Stadio Olympico until the end of the season, after falling down the pecking order at Old Trafford.

Harry Maguire’s arrival as well as Axel Tuanzebe’s return from Aston Villa meant that Smalling was considered surplus to requirements, but he has took the life in Italy quickly and is performing brilliantly.

Roma currently sit third in the Serie A.

But according to the Daily Star, his performances have attracted the attention of Inter and AC Milan, with Roma keen to beat any rivals to a permanent deal for the centre-back.

The same report states that United have turned down an opening offer of £13m for Smalling from Roma, with Ed Woodward said to be holding out for a £17m transfer fee.

Given the praise we’ve seen for Smalling in recent weeks, Roma would be getting a good deal for £17m, but cast your mind back to his performances for United in recent years and we’d take that amount!

Even though he’s been performing well, Smalling knows he has a better chance of featuring regularly under Paulo Fonseca than at United so he’s better off staying put if there’s a chance.