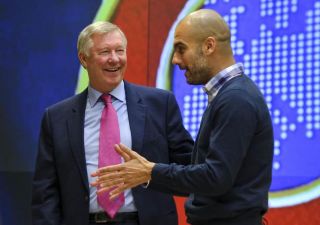 Pep Guardiola says the Man Utd side that his Barcelona team faced in the 2011 Champions League final was “outstanding”.

The Catalan football manager enjoyed an incredible period of success while in charge of Barça side between 2008-12.

And without question the best performance of Guardiola’s Barça was against Sir Alex Ferguson’s United at Wembley in 2011.

With the likes of Lionel Messi, Xavi and Andres Iniesta they were an unbelievable side, and one worthy of being confident going into the final which they’d later win.

It finished 3-1 as Wayne Rooney’s brilliant equaliser wasn’t enough to mount a memorable comeback for the Red Devils.

Goals from Messi, Pedro and David Villa were enough to land Barcelona their fourth European Cup and Guardiola’s second as a manager.

As part of BT Sport’s What I Wore series, Guardiola was asked to reminisce about his career, where he was introduced to a number of football shirts.

Then the current Man City boss was handed the Barcelona short from 2011 and the one that United wore in the final, which led him to remark about Fergie’s team.

“That Manchester United was outrageous, it was outstanding,” Guardiola told BT Sport.

“We had a lot of problems [sic] with the back four. We had three injuries in the starting XI.

“But we were full of confidence, we’d won the league and the cup and we did it.”

The final in 2011 led to Guardiola’s Barcelona departure. He then took a sabbatical from the game before taking over Bayern Munich.

Now he’s with the Berties!