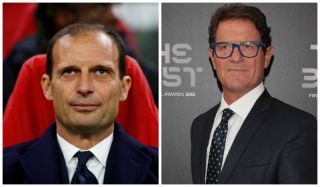 Fabio Capello believes Massimiliano Allegri is best suited to manage Man Utd, despite reports linking him with the vacancy at Bayern Munich.

Bundesliga champions Bayern dismissed Niko Kovac after being hammered 5-1 by Eintracht Frankfurt at the weekend.

Kovac was sacked with Bayern fourth in the Bundesliga after ten games, and there was talk about him getting the axe a few times last season.

While Allegri is thought to be among the frontrunners for the Bayern job after departing former club Juventus at the end of last season, Sky Sports claim Ajax boss Erik ten Hag could be on his way to the Allinz Arena instead.

It still comes as no surprise that Allegri would be mentioned for such jobs given he lead Juventus to five league titles during his stay, as well as four Coppa Italias and two Champions League finals.

Now Capello, who spent four years as England manager, has weighed in on the debate surrounding Allegri’s future.

Speaking to Italian radio station Radio Anch’io, Capello said (via the Daily Star): “He’d be a good fit at Bayern Munich, although I don’t know how welcome Italians are in Germany after (Carlo) Ancelotti.

“England’s exciting, there’s the possibility of working well and the Premier League is a championship that enriches you.

“If I was Allegri, I’d go to Manchester.”

It sounds like United will back Ole Gunnar Solskjaer for the foreseeable future, but the results haven’t been good enough this season and the board’s stance could quickly change.

Solskjaer is in the midst of a major rebuilding job and has thus far looked to bring in young, hungry British players.

He deserves to have another shot or two in the transfer market.