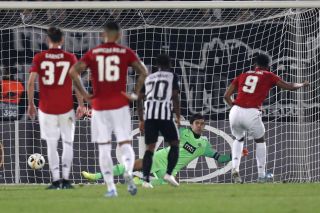 Manchester United’s Europa League campaign resembles a binary fans dream and a sequence of score-lines that would make good ol’ Louis van Gaal a very happy coach. Two 1-0s and a 0-0 has hardly set pulses racing, but the bare facts are that another single goal win – or indeed a victory of any sort – will put Ole Gunnar Solskjaer’s side into the last 32 of European football’s younger sibling.

The Red Devils currently sit top of the section at the midway point of the group stage campaign.

We ended our seven month, eleven game long winless run away from home in the reverse fixture two weeks ago in the first of three consecutive victories on the road, but any momentum we thought might build was popped by the Cherries of Bournemouth last time out on Saturday. It’s two steps forward one back for us at the minute but our team is the youngest in the league so inconsistency should be expected.

The Reds of course, won this competition three seasons ago under Jose Mourinho, but I don’t think this squad is good enough to go all the way this time, especially seeing as Ole is using it to look at some of our younger players perhaps without the same priority as his immediate predecessor at United.

Speaking of which, we expect the likes of Angel Gomes, James Garner, Mason Greenwood and Brandon Williams to all be involved along with some senior players in the likes of Juan Mata, Anthony Martial and Marcos Rojo. Paul Pogba, Luke Shaw, Axel Tuanzebe, Diogo Dalot and Nemanja Matic are among the players definitely ruled out of Thursday’s encounter, with the former not expected back until December.

The Serbian giants, the most succesful club in the country, make only their second visit to Old Trafford as the two clubs – poignantly linked by Belgrade – meet for the first time since 1953. Their city rivals Red Star were, of course, the team United faced on the ill fated journey home from Munich in 1958. For the return fixture in the capital, the United squad stayed at the same hotel as Matt Busby and his boys all those years ago.

Savo Milosevic’s side sit third in the Group L table on four points, having won one, lost one and drawn the other from their three fixtures so far.

Prediction: We’re like a box of chocolates. You never know what you’re going to get.