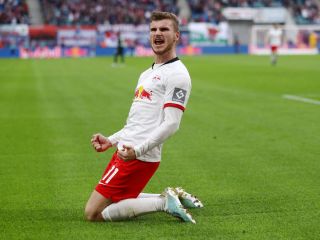 Chelsea are reportedly the latest club to show an interest in the potential transfer of RB Leipzig striker Timo Werner.

The Germany international has already proved himself in the Bundesliga and looks set to move to a bigger club than Leipzig next summer.

That could be Bayern Munich knowing how they seem to get first choice on promising talent in the Bundesliga, but The Guardian has cited reports linking Manchester United with the goalscorer.

Of course, we are in dire need of a true goalscorer and Werner is one of a few names United are constantly linked with. Another is Lyon forward Moussa Dembele — also linked with Chelsea — and Juventus’ Mario Mandzukic.

Transfer expert Ian McGarry was then quoted by the Daily Star as telling the Transfer Window Podcast that Liverpool had also begun formal talks to bring the German to Anfield.

But these new Chelsea links come from the Daily Express. They name the 23-year-old as a target as Frank Lampard looks set to enjoy a boost off a £150 million budget once their transfer ban ends.

With Olivier Giroud and Michy Batshuayi both seen as secondary options under Lampard this season, Werner could actually come in and take Tammy Abraham’s starting role in the team.

He’s that good – so the big question now is does Lampard want to sacrifice Abraham’s development or stick it out with the young striker?

Or maybe they could play together as a striking duo?

At Liverpool he’d be up against a formidable front three — Mohamed Salah, Roberto Firmino and Sadio Mané — and I don’t see Jurgen Klopp switching that up anytime soon, as much as I’m sure he’d like to sign Werner.