A win for the Reds will ensure their qualification through to the knockout stages from Group L after picking up two wins and a draw in their opening three games.

Solskjaer’s side scored with their only shot on target, Anthony Martial’s penalty, in the reverse fixture two weeks ago and will be looking to put in a far more convincing display this time out.

The Serbian side looked the more threatening side that evening and the Reds will have to be wary in defence if they are to keep their fourth consecutive Europa League clean sheet.

Sergio Romero will return in goal in place of David De Gea. Academy graduate Brandon Williams should be given another opportunity to start at left-back after a series of hugely impressive performances in recent weeks.

Meanwhile, Axel Tuanzebe is still ruled out so we expect Harry Maguire to captain the side alongside Phil Jones in central defence.

Scott McTominay is the ever-present in Solskjaer’s midfield and the lack of options in the centre of the park mean that there is nothing to suggest the 22-year-old will be rested this time out. We hope James Garner gets another chance to impress alongside the Scot after starting the reverse fixture in Serbia.

Juan Mata should play in attacking midfield after bafflingly not being utilised in any of United’s recent fixtures, notably not used from the bench when the Reds trailed Bournemouth on Saturday.

Mason Greenwood has been United’s star player in the Europa League this season and has earned the opportunity to start on the right. Jesse Lingard may be given the nod by Solskjaer after his cameo against Bournemouth but we think the Norwegian should opt for Daniel James who is most dangerous from the left. 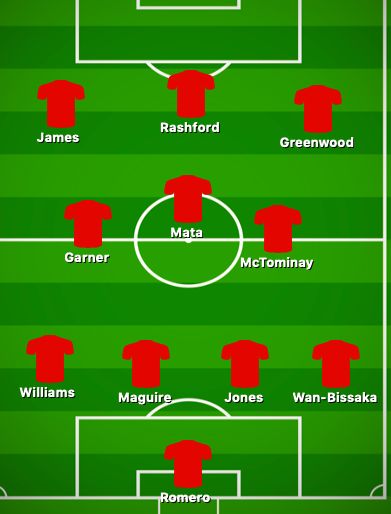