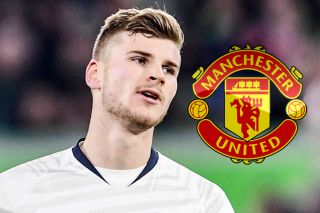 RB Leipzig sporting director Markus Krosche has given an update on the future of striker Timo Werner amid claims Man Utd are interested in making a move.

Werner is without question one of the top strikers in the Bundesliga — and it would be naive to think Bayern Munich wouldn’t act now and could see him as a long-term replacement for Robert Lewandowski. They were strongly linked with him in the summer.

At the weekend, the German international scored a hat-trick and registered three assists during Leipzig’s 8-0 win over Mainz, taking his tally for the season to 13 goals in just 15 appearances.

It wouldn’t surprise us if word of interest excited fans and make Werner a potential popular signing.

Liverpool have also been linked with the Leipzig striker, as reported by LFC blog Empire of The Kop.

Wener’s contact runs until 2023 and Krosche has revealed they have no intention of selling their star player.

“Timo just extended his contract with us recently, and we’re not thinking about letting him go at all,” Krosche told Bild (via Manchester Evening News).

United are liked with a number of strikers at the moment because of our struggles in front of goal this season and the departure of Romelu Lukaku.

The most mentioned names are Mario Mandzukic, Moussa Dembele and now Werner.

I’d say Mandzukic is a strong possibility in January with one of the other two coming in next summer.