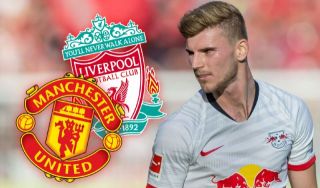 There has been lots of talk in the past week about Man Utd making a move for RB Leipzig striker Timo Werner.

It even prompted a response from Leipzig’s sporting director Markus Krosche, who said that the Bundesliga club has no intention of selling the player.

Wener’s contract runs until 2023 but interest is set to build between now and the end of the season, unless he gets a switch in January which seems very unlikely.

He scored a hat-trick and registered 3 assists on Saturday.

That may give United a bit of a dilemma — if their reported interest is genuine — because they need to sign a goalscorer in January.

Raphael Honigstein from The Athletic doesn’t know if the MUFC link is really serious, adding that he doesn’t think Werner would be a key signing.

In a live Q&A, Honigstein responded to a question on Werner, saying: “Bayern are out of the race at the moment. I don’t know if the Man Utd link is really serious – he doesn’t strike me as a key signing — but it would make a lot of sense for Liverpool at least take a very serious look.”

Honigstein is one of the best German football writers out there — and he has close links within the biggest clubs in Europe.

If the Red Devils can get Werner in this winter we’d be getting a striker for the long-term rather than settling for Juventus striker Mario Mandzukic until the summer.