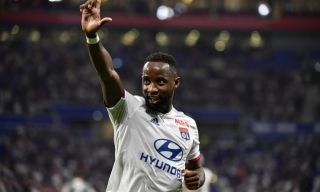 Chelsea are reportedly set to join Man Utd in the race to sign Lyon striker Moussa Dembele in the near future.

The Blues are not yet certain when their transfer ban will end, which could mean they’ll have to wait until the summer to do a deal for Dembele, according to the Daily Mail.

Even if permitted to make signings in January, Chelsea are not going to find it easy to sign the French forward. The main reason being Lyon won’t sell a star player midway through the season and Manchester United are reported admirers.

Chelsea already have Tammy Abraham as their first choice striker under Frank Lampard, with the manager opting for youth rather than secondary choices Olivier Giroud and Michy Batshuayi.

United, on the other hand, are in greater need of a player like Dembele. Fellow Frenchman Anthony Martial is currently leading the line with Marcus Rashford on the left and Daniel James on the right.

The Mail add that a United scout watched Dembele on Saturday night as he scored at Toulouse, with reporter Amitai Winehouse claiming: “United view Dembele as a good option for the January transfer window as they look to improve their forward options.

“Yet it is understood Lyon might want to hold onto Dembele until the summer to maximise his value.”

Everton are another Premier League club linked with Dembele, via Football Insider, who claim the 23-year-old would likely cost around £40 million.

However, the Daily Express claimed recently that signing a striker at United is ‘now the club’s priority’ with Dembele moving ‘higher up United’s shortlist of potential forwards’ after Mario Mandzukic’s seems likely to join AC Milan.

The same report added that Lyon aren’t ‘under any financial or contractual pressure to sell Dembele’ and will demand a fee of around £71m for his services.

Stephen Howson of Stretford Paddock is certainly in favour of United making a move for Dembele.

Moussa Dembele is one player that I think #MUFC should sign in order to save our season.

It would be great if United could strike a deal for Dembele in the winter transfer window, but I wouldn’t hold my breathe.