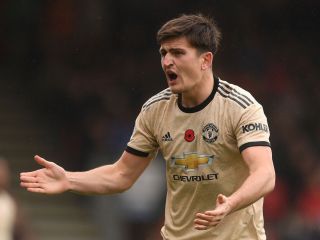 Harry Maguire has slammed the performance of Man Utd’s attackers after suffering a 1-0 defeat to Bournemouth on Saturday.

As quoted by the Metro, the Manchester United defender told MUTV that the Red Devils’ quality in the final third “wasn’t good enough” as they dropped more points on the road.

MUFC academy graduate Joshua King took advantage of some abysmal defending inside the box to score the only goal of the game for Bournemouth. Victor Lindelof was out of position and Aaron Wan-Bissaka, who had to cover his teammate’s tracks, was supposed to guard King away from goal but instead rushed his challenge to allow the Norwegian striker to score.

Ole Gunnar Solskjaer has every right to be disappointed by his players, but he will get criticism for some of his decisions no doubt.

Maguire became the world’s most expensive defender to join United in the summer.

Here’s what the centre-back had to say on United’s performance: “[We are] disappointed.

“We conceded at an awful time at a stage where we started the game really well.

“The first 20 minutes we were well on top, we have got to score in that period, with numerous chances.

“The quality in the final third wasn’t good enough to create a real clear cut chance, then they came into the game at the end of the first-half and it was an awful time to concede just before half-time, it is probably the worst.”

Sure, but while United offered very little in the final third, we were also shaky in defence.