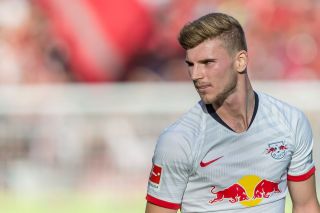 Man Utd will attempt to beat rivals Liverpool to the signing of RB Leipzig striker Timo Werner, according to a report.

The German striker scored a hat-trick and registered three assists as RB Leipzig thrashed Mainz to go third in the Bundesliga this weekend.

Julian Nagelsmann’s side climb above Bayern Munich on goal difference after their 8-0 win, while the Bundesliga champions were beaten 5-1 by Eintracht Frankfurt yesterday.

The 23-year-old striker is among the finest forwards in the world right now and it comes as no surprise that United as well as Liverpool are chasing his signature.

According to the Daily Mirror, Manchester United are interested in signing Werner. The report adds that the Red Devils will try convince the Germany international to sign for them by promising him regular starts.

Werner extended his contract at Leipzig till 2023, as per their official website, but German Sports magazine Kicker claim his release clause is only €30m.

Timo Werner now is the top earner at #RBLeipzig according to kicker. The magazine also writes that his exit clause is €30m and not the €60m that Bild reported. #Bayern, in the meantime, were sure that they would land him on a free transfer next summer according to kicker.

A goalscorer who can also create goals. That’s what United need but this could be a difficult deal to get done in January, though if his release clause is that low we’d be silly not to try get him in the winter transfer window.

Given we failed to score against Bournemouth this weekend, losing 1-0 on the road, recent displays shouldn’t fool Ole Gunnar Solskjaer to think we can get through the result of the season with Marcus Rashford and Anthony Martial.

More creativity is needed in midfield too, as it would difficult for any striker in this season.