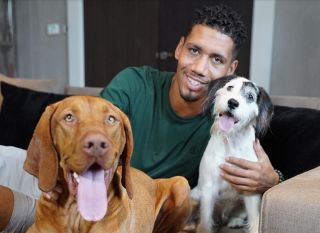 I couldn’t imagine being without my dogs for six weeks, so moving to Rome hasn’t been all that easy for Chris Smalling.

After leaving Manchester United for AS Roma on a season-long loan, the defender had to wait six weeks until he could see his dogs after they were left in England while he settled abroad.

The England international left Old Trafford after realising he wouldn’t get the game time he wanted following Harry Maguire’s arrival from Leicester City.

And, after spending his first few weeks in a hotel, which isn’t ideal for most pet owners, Smalling has now moved into a 700-year-old house with wife Sam, their five-month old baby and dogs Ruben and Miley.

However, the dogs were brought to Italy a month or so later via camper van.

The smallest dog of the pair wasn’t very impressed with Smalling, probably feeling betrayed that his owner had not been around, but the biggest, a beautiful Hungarian Viszla was thrilled.

In an interview with The Athletic, Smalling said: “My wife has always been supportive. She said: ‘If you want to move, we’ll all move. We’ll do what’s best for your football.’ I knew she’d say that, which I appreciated. So I moved.

“I lived in a hotel for a month and we moved into a beautiful house last week. It’s 700 hundred years old, just outside Rome. It’s surrounded by greenery which is important with our dogs.

“My mother-in-law has got a camper van and she brought our dogs here.

“I got back home at 10pm to see them for the first time in six weeks. The little one was p***ed off with me because I’d left her for so long, the bigger one was happy to see me.

“Everyone is here now and that feels good. I’ve had to change my wardrobe because I’ve been living in shorts and T-shirts. It was 28 degrees at the end of October – that’s a perk.”

🎄 There’s an early Xmas present (a signed @manchesterunited shirt!) to be won on my Facebook page! Link in bio. 🎁 #Competition #Manutd

It’s really good to hear everything is going to plan for Smalling after settling quickly in Rome. He took a risk and it’s going in his favour.

We’re sure the little one will soon get used to life in Rome.

Manchester is only a short flight away!