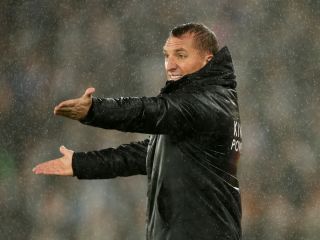 Broadcasting revenue as well as the guaranteed sums of money clubs receives for being in the top-flight has put the lower table clubs in stronger positions financially, which is part of the reason Man Utd had to pay £80m to sign Harry Maguire.

The Foxes take on Crystal Palace later today, with the Eagles only after losing Aaron Wan-Bissaka to United in the summer. A relatively unproven player who, again, cost a lot!

READ MORE: Manchester United – Back to square one after Bournemouth defeat

This shows that clubs like Leicester and Palace will no longer be bullied by bigger clubs for their star players, like you see in Germany whenever Bayern Munich come knocking.

“Teams are in a much stronger position to where they were years ago,” Rodgers said, as per Sky Sports.

“It was a gimme that players would leave. But remember, it wasn’t that long ago that Shariri left Inter Milan for Stoke City.

“The power and prestige of the Premier League, plus the financial clout the teams have means you’ll always lose players, but you also have a greater chance to hang onto them.

“It all depends on what it is for. For players it will be about game time and money, you have to respect that, their career is so short.

“There are greater opportunities for a place to stay, develop and improve, and see where they can go later.”

“Yes, but there are other goals,” he added. “The reality is we will never be able to say what some of these guys can get at those clubs.

“You can leave here and double or treble your wages. That’s the reality and it is important for players and people.

“If you cannot pay that, there is an opportunity for players to move on.

“It’s a great club here for them to come in and learn. It depends on what the player wants though.

“Look at Jamie Vardy, he was here and he had opportunities to leave but he decided no, he wanted to be here, to stay and continue the legendary status he has.

“Harry Maguire came in, did well for a couple of years, and decided he wanted to move to Manchester United, it’s different.”

While one can respect Vardy’s decision to remain loyal to the cause, one can’t dismiss Maguire for wanting to better his career by joining a bigger club.

United have been linked with moves for two more Leicester players, whom Rodgers will want to keep hold of — since James Maddison makes everything tick for them in the final third and how Ben Chilwell is arguably their best defender since Maguire left.

The Daily Mail claim United are eyeing up a sensational £130m double transfer swoop for the Leicester pair.