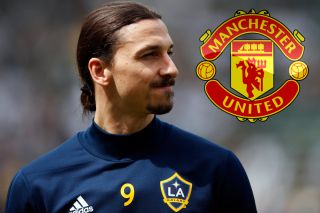 Man Utd have identified former striker Zlatan Ibrahimovic as a target in the January transfer window, according to reports in Italy.

Having spent the last two seasons in the MLS with LA Galaxy, Ibrahimovic will say his goodbyes with a return to Europe beckoning.

While the 38-year-old has pretty much confirmed that his next destination will be Spain, seemingly knowing what club he is headed to, Tuttomercatoweb claims that Manchester United have told the forward that they wish to hand the Swede a deal to take him back to Old Trafford.

Ibrahimovic, who played for Barcelona between 2009-2011, left Camp Nou under controversial circumstances following a fall out with ex-manager Pep Guardiola.

Earlier this year, Zlatan joked that he would return to United if the club came calling. It was tongue in cheek — as seen in the video below:

United have struggled for goals this season after failing to replace Romelu Lukaku during the summer.

Marcus Rashford has been unable to fill the void, but Anthony Martial has been scoring goals since his return from injury, resuming that all important goalscoring form he started the season with but these are early days and United need another goalscorer.

It made perfect sense for #MUFC to sell Lukaku and Sánchez, but to allow both to leave without either being replaced is reckless in the extreme and makes an already thin squad even weaker.

Juventus striker Mario Mandzukic is a known target. At 33, you’d could see Ole Gunnar Solskjaer opt for the Croatian instead.

It is unknown if Ibrahimovic would take a loan spell, but that would be perfect for United until the end of the season at least.

That would give United some time to sign a better and younger striker in the summer.