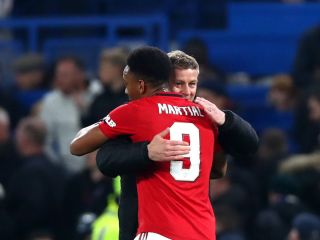 Man Utd manager Ole Gunnar Solskjaer heaped praise on Anthony Martial, saying the best is yet to come from the Frenchman.

We certainly hope so. While Martial has shown plenty of promise since his arrival in 2015, the former AS Monaco still hasn’t developed into a true goalscorer.

But with the lack of scorers in the squad this season many hoped that Martial would kick on now he’s 23-years-old and the initial signs are good.

Martial was scoring goals at the start of the season up until he got injured. Then he had eight weeks out before returning again to more goals!

The France international has made 181 appearances for the Red Devils, scoring 52 goals and providing 30 assists.

His overall for this season is pretty impressive, though there is room for improvement as with any young player. Martial has four goals and an assist in seven matches across all competitions.

Solskjaer feels that Martial has become more mature and his best is yet to be seen. Speaking to the official Man Utd website, the manager said:

“I don’t think he has had a long run of games as a No.9 since he played many years ago as a boy. You have to be obsessed with scoring goals as a No.9 and he is looking more and more like a player who wants to score goals and not just show his ticks, and for me, he has matured a lot in his behaviour on the training ground as well. I believe we will see the best off him in the next few years.”

With Romelu Lukaku long gone to Inter Milan and Marcus Rashford failing to fill the avoid in Martial’s absence, the French striker has a big opportunity to be United’s main man up front.

We’d be in a better position this season if he wasn’t out injured for so long, but thankfully he’s back and scoring goals.