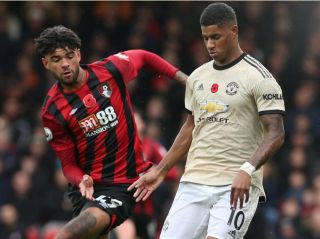 Another bad result away from home in the Premier League for Man Utd.

Bournemouth last beat us four years ago thanks to a Joshua King winner, but history repeated itself today as the Cherries won 1-0.

Here are four observations from the game:

Shakes at the back

Make no mistake about it, United have improved at the back but it’s not perfect. Aaron Wan-Bissaka, who was partly responsible for King’s goal, has been a very good addition as is Harry Maguire.

The problem I see with Maguire and his partner for now Victor Lindelof is the lack of speed. Neither is very quick and to add to that, I actually feel the Swede has been a liability at this times season.

Maybe things will improve a bit when Axel Tuanzebe returns. Or maybe United need to spend more money on a centre-back?

P.S. Wan-Bissaka rushed his challenge on King for the goal when he didn’t need to make such a move… but where was Lindelof?

There were phases in the first half that United’s attacking trio looked hungry to make things happen. Daniel James whipped two crosses in during the opening stages that warranted goals, but Andreas Pereira and Fred were unable to convert.

While Anthony Martial and Marcus Rashford looked good in the first-half, there was absolutely no link-up play after the break and it makes you wonder why there was less firepower and intensity all of a sudden. Why do United drop off like this in games?

However, there was a push for a goal in the last 5-10 minutes but it was too late for that. We should have been doing that earlier in the match.

The previous point brings us on to this…

There was not enough tempo in our midfield today to allow for Rashford and Martial to feed on chances.

Pereira, McTominay and Fred were shocking in possession. Wan-Bissaka and Maguire didn’t coat themselves in glory either.

The momentum we came into the game with has now been shot.