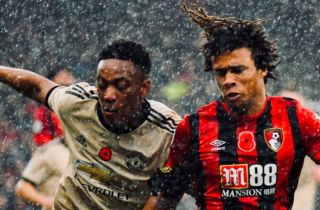 Of course, it was a disappointing game to lose, especially when Bournemouth weren’t very good, but our attacking players impressed in the first-half at least.

From the off, Daniel James was making this happen on the right. The Bournemouth defenders didn’t know how to cope with the Welsh winger, so it’s a shame our midfield couldn’t do more to make sure James was a constant threat.

Marcus Rashford has one or two amazing touches but failed to great into dangerous areas to find the back of the net, and the same could be said for Martial.

Solskjaer told Match Of The Day, as quoted by the Manchester Evening News: “Mason Greenwood was unlucky when he hit the post, I saw him scoring those chances more than missing them, but he will come good.

“I thought Marcus Rashford and Anthony Martial defended very well against them, but in games like this one it is so important [to] get the first goal and they did it.”

The only goal of the game came at the end of the first half when ex-United youth player Joshua King made the most of some shocking defending inside the box.

Aaron Wan-Bissaka will take some of the responsibility for diving into the challenge and not standing his man up, whilst Victor Lindelof’s whereabouts will leave you baffled.

It was too easy for King.

Solskjaer had this to say about the goal: “The first goal was always going to be important. Every time you concede a goal it is bad but we are disappointed with this. We had time to tackle on a couple of occasions. You have to say it was a bit of magic that won the game.”

A bit kind to King, Ole? He was gifted space;