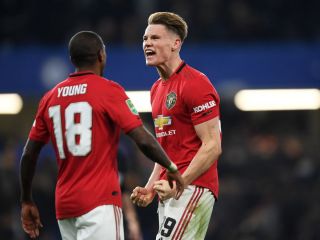 Ole Gunnar Solskjaer has named his starting eleven to face Bournemouth at Dean Court as Man Utd look to make it four away wins on the bounce after going almost half a year without winning a match on the road.

Like we seen against Norwich City in the 3-1 win last weekend, Solskjaer is switching to and from a three at the back system. This weekend he’s gone with a back four and has trusted Ashley Young ahead of the exciting Brandon Williams, who has featured more as a left-wing-back when the manager opts for an extra centre-back in his line-up from the start.

READ MORE: “Did Lingard design it?”: These fans react to Man Utd shirt for Bournemouth clash

David de Gea returns between. the sticks after Sergio Romero got minutes in the Carabao Cup midweek. Despite injury concerns, Harry Maguire and Victor Lindelof will lead from the back, while Aaron Wan-Bissaka starts at right-back.

The midfield trio consists of Scott McTominay, Fred and Andreas Pereira — as we predicted beforehand — and we’ll need much of the same from the Scotland international who has been making everything tick in Paul Pogba’s absence.

Up front, no surprises again as Daniel James starts on the right, Anthony Martial in the middle and Marcus Rashford will drift in from the left.

The team is in! #MUFC #BOUMUN