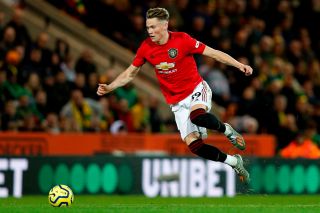 Scott McTominay has been magnificent in recent outings for Man Utd.

You can no longer describe him as José Mourinho’s boy because since Ole Gunnar Solskjaer’s come in, he too has been impressed by the Scotland international.

Against Norwich he ran the show in midfield and did the same against Chelsea, although in a more disciplined manner after picking up an early yellow card in the game.

Not too long ago McTominay had been trying to get into the team, but now he’s a regular and it’s a credit only to himself how far he’s come on in such short time.

McTominay is getting better and better each week — and Solskjaer sung his praise at the press conference this morning, as per the Manchester Evening News.

“He’s been excellent and now that him and Fred work in a good relationship, work well together [sic] did that last season, PSG, when we had a few injuries and now as well they are working as a pair.

“Scotty’s a leader, a Manchester United boy, you can see he’s been a striker with the goal at Norwich on a half turn, but he’s developing into a very good midfielder.”

Isn’t that the ultimate praise Solskjaer could give a young player breaking into the side? We haven’t had leaders in a long time and it certainly looks like McTominay can offer on-pitch instructions.

The level of maturity he has shown for a relatively new player in the first-team is second to none.