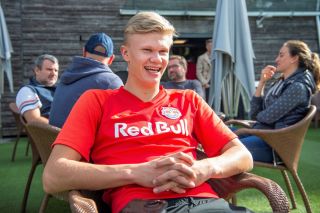 Man Utd and Juventus lead a queue of over 20 clubs monitoring the progress of Erling Beaut Haaland, according to the Guardian.

The report by the ever reliable Fabrizio Romano also claims Red Bull Salzburg are open to selling Haaland in the summer.

It throws up some interesting information like how Juventus were keen to sign the Norwegian striker from Molde in 2018 and sporting director Fabio Paratici was ready to offer €6m until the teenager decided to move somewhere he would play regularly rather than sit on the bench or be loaned out.

United should be one step ahead when it comes to Haaland, though.

Ole Gunnar Solskjaer and the player worked together for two seasons at Molde in 2017 and 2018. The Manchester United boss is responsible for preparing Haaland for life as a professional football and now he’s scoring goals for fun in the Champions League!

The striker joined Salzburg from Molde in January and has scored a remarkable 23 goals in 20 appearances for the Austrian side. There’s no way they are going to be able to hold onto him beyond next summer if he continues scoring goals at that level.

Salzburg bought him for around €9m, as per the Guardian report, but you can expect that to multiply a few times when he moves on again.

The Austrian side will be waiting until the end of the season to put a definite valuation on their star.

United need a striker at the moment and it looks like the club will make a move for Juventus forward Mario Mandzukic in the winter transfer window, as reported by the Daily Mirror.

That is sure to be seen as a short-term fix, with Marcus Rashford and Anthony Martial needing to do more in front of goal to make United a real force again.

Haaland could be the answer for Solskjaer’s long-term objectives…