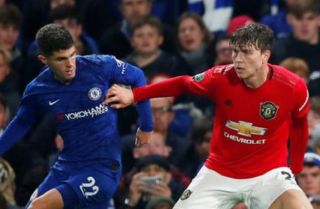 Man Utd are waiting to hear the latest on the fitness of Marcus Rashford, Victor Lindelof and Harry Maguire ahead of this weekend’s trip to Bournemouth.

Ole Gunnar Solskjaer’s side have gained some momentum in recent weeks and go into this away fixture after three consecutive wins on the road.

“It’s still early,” Solskjaer said of the trio, at Friday morning’s press conference (via the Guardian). “Hopefully we can get them back on the pitch tomorrow.

“They had some treatment yesterday, a little more treatment today, a light session and hopefully they’re ready. I can’t tell you exactly how.”

However, something tells us all three will start against the Cherries…

The manager does not expect the following players to return until after the international break: Diogo Dalot, Paul Pogba, Axel Tuanzebe, Nemanja Matic, Luke Shaw.

Eric Bailly won’t be back till after Christmas.

David de Gea will be between the sticks again after Sergio Romero played the full match against Chelsea on Wednesday night.

United will line-up in a back four and hope to attack Bournemouth like they did to Norwich City last week. I think the usual centre-back pairing will be fit to play, so that’s Maguire and Lindelof in the starting XI. Aaron Wan-Bissaka and Brandon Williams in the full-back positions.

Scott McTominay is one of the first names on the team sheet now. We expect the Scotland international to be joined by Fred and Andreas Pereira in midfield.