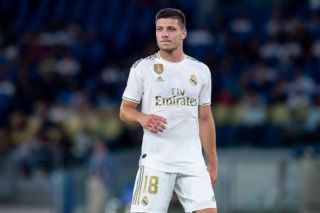 Manager Ole Gunnar Solskjaer was left with just two senior recognised strikers following the summer sale of Romelu Lukaku to Inter Milan, and he could do with reinforcements up top to ensure they have the best possible chance of finishing in the top four this season which already looks a stretch.

Both Marcus Rashford and the returning Anthony Martial have looked sharp in recent outings, with the latter scoring on his first start since getting injured back in August, last weekend against Norwich. Rashford, on the other hand, scored a brace in the 2-1 win over Chelsea on Wednesday night.

However, cover is needed, and Jovic could be lined up as a potential new arrival. The Serb joined Los Blancos in the summer for €65m, as reported by the Guardian, but has struggled in his new surroundings, scoring only one goal in 10 appearances for the club.

Those are alarm bells straight away.

United need to ensure whoever they buy can score goals immediately. It’s the problem at hand and it needs addressing now.

Spanish publication El Desmarque (via Manchester Evening News) suggested in the past week that a possible swap deal with Paul Pogba could be in the pipeline, with Jovic and Real Madrid teammate Gareth Bale coming to Old Trafford.

Surely at this stage the Bale boat has sailed. If United wanted him in the summer, a deal would be easier than ever to strike.

Bleacher Report claims that both United and Bundesliga champions Bayern Munich are being kept up-to-date with Jovic’s progress by Madrid.

Of course, we’ve already mentioned how Jovic has had a slow start at Real Madrid, but he is behind the experienced Karim Benzema in the pecking order too. The French striker has scored 7 times in 10 La Liga games so far this season, so Zinedine Zidane doesn’t need to change anything up top just yet.

It would also be ridiculous to give up on Jovic this early.

Zinedine Zidane has been left unimpressed by Luka Jović and is prepared for the striker to leave Real Madrid on loan just two months after joining. (Source: MARCA) pic.twitter.com/FqhKzvFsQ6