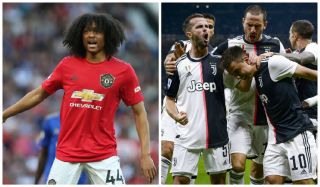 The Dutchman, out of contracts in the summer, is yet to enjoy a breakthrough performance for the first-team despite being given a handful of chances.

The 19-year-old has not scored a single goal in four of his first-team appearances to date, and it looks as though he could do with a loan spell somewhere to gain more experience before playing at Premier League level.

But that hasn’t stopped Juventus from registering interest in the young player, as reported by the Daily Mail.

The situation could be reminiscent to Paul Pogba leaving United for Juventus before breaking into the first-team.

Pogba went on to quickly become one of the world’s hottest talents before returning to Old Trafford again — in a rather costly manner, but the less said about that the better.

In September, Solskjaer said (via The Sun): “The young kids do get chances and when they take them, it can be life-changing.”

Nobody can doubt Chong’s talent and Juventus are likely to be scanning through Europe for players just like him, especially if they can be bought on the cheap.