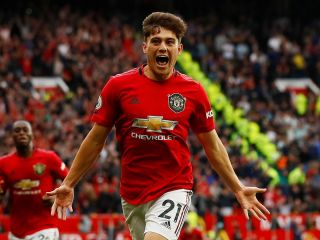 Daniel James has been sensational since joining Man Utd.

Not just his goals, assists or even performances, but he’s never say die attitude and willingness to get back up when kicked to the floor.

The Welsh winger admits he was surprised to have been “chucked in” to the first-team at Old Trafford as early as he was this season — and it all started with a goal against Chelsea on the opening day of the season!

James joined Manchester United in the summer from Swansea City in a £17m deal (£15m plus £3m in bonuses), as per Sky Sports.

The 21-year-old was one of three signings made in the summer along with Aaron Wan-Bissaka and Harry Maguire, and with all new arrivals settling quickly Ole Gunnar Solskjaer’s rebuild is starting to take shape.

Though our results on the pitch — from the overall team — have been very disappointing. Thankfully we are starting to see signs of improvement.

But he nor us expected such an immediate impact after joining.

“The plan for the season for me was to play as many games as possible,” James said, as quoted by The Express.

“I came to United maybe thinking I could be a fringe player.

“I wanted to try and get in the team as quick as I could but I thought it may take a bit more time.

“I got chucked in a lot earlier than I thought. But I was ready for it.

“I worked hard during the summer. It was about proving people wrong and showing what I can do.

“But now I have started to play I have to change that. Coming in, I set my goal to get ten goals.

“I scored three in four and people said to me, ‘Are you going to change those goals now?’

“But I said, ‘I haven’t reached that yet so I’m not going to change those goals.’”

The sky is the limit for our James!