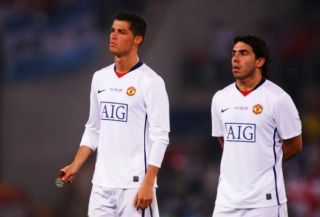 Carlos Tevez has recalled his failed attempts to try and outshine Cristiano Ronaldo to training in the mornings during their time together at Man Utd.

The Argentine then went on to enjoy more success at Juventus and Boca Juniors.

READ MORE: Manchester United could be without three more starters vs Bournemouth

Whatever your feelings are towards Tevez and his offence manner towards anything MUFC, he was a fine player. One of the Premier League’s best?

It won’t surprise you that Tevez, who had a bull terrier aura about him on the pitch, went a step too far to rival an ex-teammate’s desire and it backfired!

You can almost picture the scene as Tevez rocks up to Carrington at 6am. Gobsmacked that Ronaldo was there, before everyone else again, to train.

That’s the level of dedication that has made Ronaldo one of the best footballers to play the game. Without it, who knows?