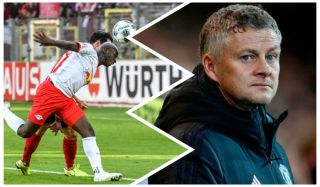 Some people debate whether Man Utd still has the lure it once had in the transfer window.

The last few years has seen the club become pretty wasteful in the transfer market and now expectations each season aren’t what they once were.

I think it’s fair to say most of that comes down to recruitment and the running of the club, though I’d still argue Manchester United is a club most footballers want to play for — even if it means no immediate success like it did before.

And, to back that up, RB Leipzig star Amadou Haidara has vowed to one day play for United.

The midfielder joined the Bundesliga side this summer after impressing for Red Bull Salzburg in Austria.

Nevertheless, it seems like he’s already planning his next move.

“My dream club is Manchester United,” Haidara told footmali.com, as cited by the Manchester Evening News. “I will fight with all my strength to one day play for that club.”

The club is understood to be doing background checks on each of their transfer targets to ensure they will fit into the squad quickly.

One half of the battle is keeping players on side, and Solskjaer is trying to do that with a young but hungry bunch.

We haven’t seen Haidara play but it may be worth checking out if he’s that interested in joining United one day. It’s not as if we’re stocked for midfielders at the moment!