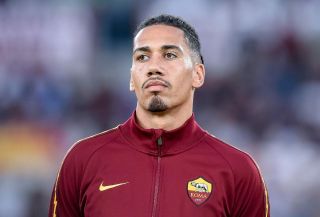 Chris Smalling appears to be wanted permanently by Roma having impressed since his loan move to Italy.

The experienced centre-back was deemed surplus to requirements at Old Trafford, but much to our surprise he is highly-rated by those watching him in Serie A!

Fair play to Smalling, who got a lot of grief during his time at United for not becoming the player Sir Alex Ferguson thought he would, but a move to Italy could be exactly what he needed.

This could also be the start of a new chapter for Smalling should he leave United permanently for Italian football.

Ole Gunnar Solskjaer signed Harry Maguire during the summer which all but put a nail in Smalling’s coffin, especially with Axel Tuanzebe returning from his loan spell at Aston Villa and being third choice centre-back behind Victor Lindelof.

According to Di Marzio, next week could see a breakthrough in negotiations with Roma planning a €12m bid with an additional €3m in bonuses for Smalling.

Though given the reports and analysis coming out of Italy re: Smalling, that sounds very cheap…

It’s not like Smalling is missed at United or we’re scrambling for cash, but the valuation of footballers nowadays has reached the extreme. Such a deal would be a bargain for Roma and they’re not going to give us one of their players in similar fashion.