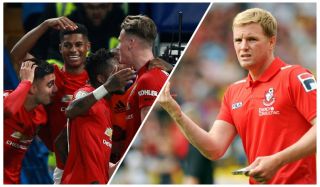 Man Utd will hope to make it for away wins on the bounce when they travel to face Bournemouth in the Premier League on Saturday.

Ole Gunnar Solskjaer’s side are beginning to turn things around after a challenging start to the campaign, and this week we knocked Chelsea out of the Carabao Cup to reach the quarter-finals (United have been drawn against Colchester United).

Cherries boss Eddie Howe will be pleased with the position that Bournemouth find themselves in (9th) after 10 Premier League games.

Since their promotion to the top-flight in 2015, Howe has done a great job at making Bournemouth a steady Premier League side. Now he can definitely rely on his players to avoid relegation again this season.

READ MORE: Breakthrough in negotiations expected next week between Man Utd and Serie A giant

They are entering a period in which goals aren’t coming easy (we know all about that) after failing to score in any of their last three games — the previous two being goalless draws.

That’s something United can take into the game and the lads will be disappointed not to have kept clean sheets against Norwich City and Chelsea in recent outings.

It’s amazing that, having failed to win an away game in almost half a year, United now have three wins on the road in the past week.

Since going with three at the back against Liverpool, a game that ended 1-1, Solskjaer appears to have stumbled across a new system.

The Norwegian played a more fluid 4-2-3-1 against Norwich last week so he will change it up depending on the job at hand.

United will know that the task they fave on Saturday is a completely different one against a Bournemouth side trying to get back on track.

Howe is unlikely to have talented youngster David Brooks back for the game, which is a shame when you consider he’s been linked with United in the past and it could be an opportunity for Solskjaer to take a closer look at the winger.

United continue to be without Paul Pogba after it was confirmed last week that the Frenchman will be out until December with a foot injury.

United appear to have rediscovered their mojo in recent weeks. We expect another win on the road, in convicting style too.